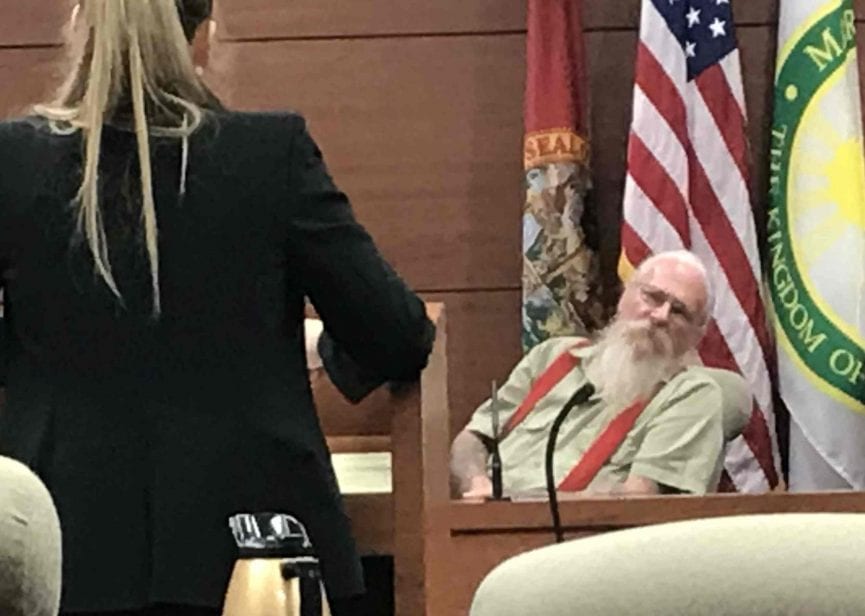 James Steele Reid, who testified, acknowledged to cutting the kitten tails but did so as he was going to claim them as his own.

A jury found a man charged with five counts of animal cruelty last year not guilty on Thursday.

At 7:01 p.m., a Marion County Sheriff’s Office bailiff announced that the four men and two women of the jury had reached a decision on the case. They were filed into the courtroom five minutes later and the clerk read the verdict at 7:07 p.m.

James Steele Reid, who stood beside one of his lawyers, Andy Pozzuto of the law firm Alavi, Bird and Pozzuto, looked relieved when the words “not guilty” were read by the clerk. At 7:12 p.m., Judge Sarah Ritterhoof Williams thanked the jury, who began their deliberation at 5:47 p.m., for their time and dismissed the proceedings.

“The evidence spoke for itself,” Tania Alavi said.

Assistant State Attorney Lydia Swanson declined comment. Dressed in jeans, red suspenders, and a shirt, Reid said no when a Star-Banner reporter asked for a comment. A majority of the jurors also did not want to talk.

In her closing argument that began at 4:57 p.m., Swanson, who went first, said Reid deliberately lopped off the tails of the five kittens, adding that his actions “cause unnecessary pain to these kittens.”

Alavi, in her counter to Swanson’s argument, asked the jurors to put their emotions aside and “judge the case on the facts you heard.” She said Reid did not mutilate or torment the kittens. She said if he did, then why he would have put iodine on the kittens’ wounds after snapping their tails.

Reid was arrested on a warrant of animal cruelty by sheriff’s deputies on his 68th birthday on Nov. 27, 2017. He was accused of cutting the tails off five kittens in late September, sheriff’s officials were told. At the time, deputies were told that the kittens were roughly a month old.

Marion County Animal Services officials were notified about the incident and they began investigating. An animal services investigator told deputies that if a kitten’s tail is snipped, it should be done when the kitten is between three and five days old. Anesthetic is usually used when the procedure is done and a single stitch is used to close the wound.

Deputies were told that in the case of the kittens, their tails were improperly cut because of their age. Also, there was no anesthetic and no stitches to assist with the healing.

Maria Myers, Reid’s sister, took the stand and said they lived on farms and their father used to cut the tails off kittens.

Reid, who took the stand in his defense, admitted to cutting the kitten tails, but did so as he was going to claim them as his own. He said when he cut the kitten tails, they did not scream. He said they were many Feral cats running around the property and they would feed them.

Lilly Baron, president of Society of Cruelty Against Animals of Ocala, who sat through the day-long trial, was disappointed with the decision.

“This sends a very negative message and he will do it to other kittens,” she said.

Baron said her organization adopted the kittens after the incident and they’re doing well.