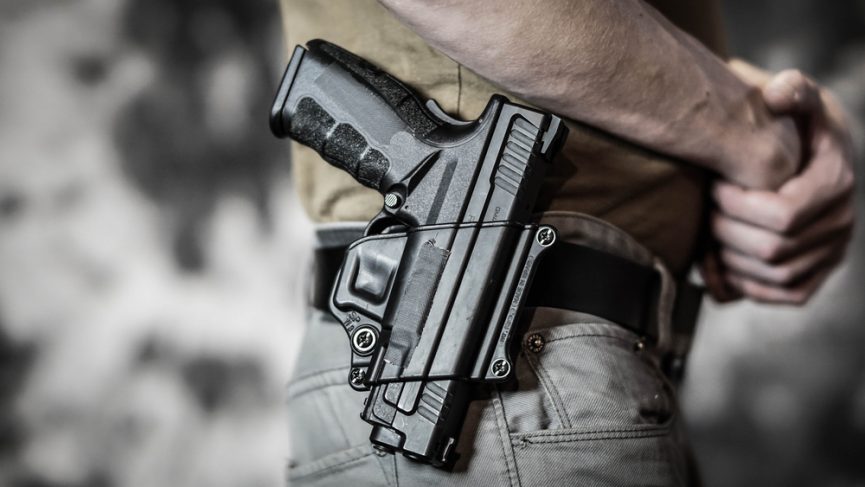 Gun laws across our nation are a hot topic for debate. States vary in their restrictions on carrying firearms. Federal laws ban carrying guns in specific locations, even with permits, such as government buildings and courthouses, post offices, military bases, polling places, federally controlled properties, and airport terminals.

Florida does not require a permit or license to purchase a firearm for residents at least 21 years of age with a clean background check. For those under 21 years of age, there are exceptions made for law enforcement, correction officers, and those in military service. According to the Florida Department of Law Enforcement, persons not eligible to purchase or possess a firearm are those with a felony conviction or a misdemeanor domestic violence conviction, adjudicated mentally defective, addicted to drugs, or an illegal alien.

A person must have a concealed weapon permit to carry a gun. Some exceptions are law enforcement personnel, the use of a firearm for target practice under safe conditions, or when a gun is securely encased in the interior of a conveyance. Open carry is publicly carrying a legally owned firearm in plain sight. It is illegal except when engaged or returning from fishing, camping, or hunting.

Constitutional Carry, also called permitless carry, means the state does not prohibit citizens who legally possess a firearm from carrying a gun, both openly and in a concealed manner. The term was derived from the Second Amendment to the United States Constitution regarding a citizen’s right to bear arms. A bill was introduced by Florida Representative Anthony Sabatini, HB-103, for citizens to carry firearms without licenses or permits in the 2022 legislative session. Although the bill was stalled in the Criminal Justice & Public Safety Subcommittee in March 2022, it was the first step toward changing the gun carry laws in our state.

Under HB-103, Carrying of Firearms without Licenses:

Although unsure of the timeline, Governor Ron DeSantis is confident that the legislature will soon pass Constitutional Carry in Florida, and he will sign it into law.

Gun rights advocates staunchly believe that Constitutional Carry restores the rights given to the citizens by the nation’s founding fathers. The National Rifle Association believes that law-abiding citizens should not have to pay fees and taxes for a license to exercise their right to self-defense. They feel that gun violence would reduce if there were more armed citizens. Gun-control advocacy groups, such as the Brady Campaign to Prevent Gun Violence, are strenuously opposed to Constitutional Carry, fearing that public safety would be in jeopardy. They strongly feel that gun violence would increase if there were fewer restrictions on carrying guns.

Contact The AP Law Group to Protect Your Rights and Freedom

At The AP Law Group, we stay current on the latest developments in Florida State and Federal laws to best serve our clients. You may be facing harsh penalties if you are charged with a misdemeanor or felony gun crime, such as an unlicensed carry or concealment of a firearm, improper exhibition of a firearm, possession or use of a firearm, or other weapon offenses.

Our criminal defense attorneys are passionate about protecting the rights and freedoms of our clients. Let us assess the evidence against you and provide a solid defense. Our goal is for a dismissal or a reduction of the charges. To learn more about your options and legal defense, contact The AP Law Group at (352) 732-9191. We are here to help.